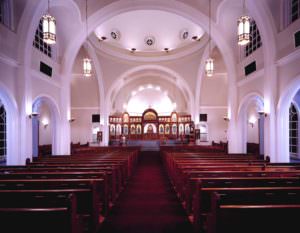 Over millennia, cities have existed not exclusively for the sake of commerce or culture but as Aristotle philosophized nearly 2,500 years ago, “for the sake of the good life.” Vardry McBee, heralded as the father of Greenville, perhaps recognized the role city centers can fulfill in inciting human flourishing and caring for the soul. Appropriately, McBee donated portions of his vast early 19th century land holdings as sites for four churches in Greenville’s then budding downtown.

CGD has played a role in expanding and renovating three of those original church buildings – First Presbyterian, Buncombe Street United Methodist, and Christ Church Episcopal. Additionally, CGD has had a hand in the restoration and renovation of Trinity Lutheran, Downtown Presbyterian, and a new St. George Greek Orthodox Cathedral – all churches within Greenville’s downtown.

It goes without saying that brick, limestone, and mortar cannot redeem. However, as architects and designers, we recognize that the fashioning of a church building has pronounced implications on something as intimate as a worship experience – whether encountered at the scale of a city block or a communion table. It has been a delight for many at CGD over the years to examine liturgies, doctrines, and worship styles and craft spaces to complement. Having the opportunity to complete such work in our own downtown and see for ourselves how it contributes to the city center’s flourishing is an ongoing joy.