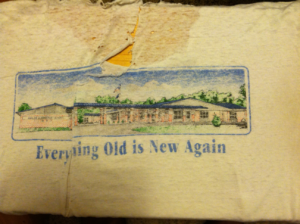 Pickens County takes immense pride in its small, rural, and high achieving elementary schools. Ambler Elementary School is a case in point. Twenty years ago, I was a 4th grade student attending class in the brand new CGD designed classroom and gym wing. The scope of the project also included renovating the cafetorium and existing classrooms, reorienting the main entrance, and building a new covered walkway along the pick-up and drop-off drive.

My memories of the new space are fond. The new gym, though small, was a cathedral compared to the musty portable that a group of twenty 10 year olds could seemingly rattle off of its cinder block foundation when doing jumping jacks or dosey-doeing during state-mandated square dance lessons. The renovated cafetorium was similarly grand to a 4th grader. Sunlight would burst through the large east facing windows in the morning while the entire student body waited to line up and go to class. It was during one such morning wait that a friend of mine plucked a live foot long snake off the floor as if it were just a napkin that needed to go in the trash. This was the same friend who came in another morning after being sprayed by a skunk and whose backpack, doubling as an after-hours game bag, contained traces of squirrel hair and blood.

The renovations and additions to Ambler merited t-shirts (now clearly tattered and threadbare) for the entire student body and a visit from Governor Beasley. It was a big deal and a joy to call ‘ours’. Looking back, it’s a great case for the impact designers have on the lives and wellbeing of those they serve – even 4th graders in northern Pickens County.