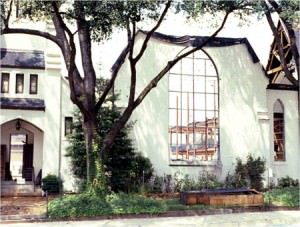 In the mid-1980’s CGD was charged with expanding First Presbyterian Church’s beloved sanctuary from 500 seats to 1200 seats while preserving the character of the building.  The solution was to rotate the axis of the sanctuary ninety degrees and duplicate the column detail with a much larger pulpit and choir loft.  When construction began, termite infestations were discovered in the entire structure.  Much more demolition was required than originally planned, causing great concern among parishioners. All was resolved when the award-winning new sanctuary was completed.