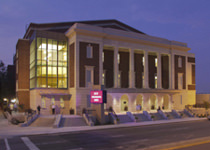 Craig Gaulden Davis, along with collaborators Stevens & Wilkinson and Contract Construction, was honored by the Historic Columbia (SC) Foundation design for renovations and additions to the Township Auditorium.  The award, for New Construction in a Historic Context, was presented May 3, 2011 in a ceremony at Columbia’s Trinity Episcopal Cathedral.

The Township Auditorium was built in 1930.   The auditorium seated 3000, but was hamstrung by inadequate lobby and backstage space.  New public space was inserted between the auditorium and a relocated facade.  Backstage additions have reduced down time between shows and improved income for the venue, which is owned by Richland County.